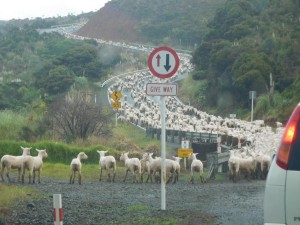 I drove to Cape Reinga in November with a German visitor who was keen to see where the Pacific Ocean meets the Tasman Sea. We would have been able to see that spectacle of nature an hour earlier than we did, had it not been for appalling weather and a couple of sheep farmers who decided the conditions were just right to shift their mob a couple of kilometres up the road. On State Highway 1, in the teeming rain and amidst tourist drivers with big camper vans and limited experience in driving these safely on the road.

Where is the Minister for Horticulture then? Missing in Action by the looks of things. Yes, Horticulture is about growing stuff, so simplistically put its a bit like agriculture, isn’t it? There we are chaps. Problem solved. Just get on with it.

Well, alright then – but couldn’t we at least get a Minister for Not Building New Housing Developments on Prime Horticultural Land? Man, we do need one of those because if we keep on covering our prime growing lands with concrete, we will not be able in the long run to feed our people with New Zealand grown produce.  Unless of course we switch to urban horticulture .  But hang on – we haven’t got enough houses for all the immigrants we are letting in- and more to the point, our children, who have the audacity of wanting a place to live as well. So what do we do?

The terms ‘government’ and ‘strategy’ are not the easiest of bed fellows, unless, of course, ‘re-election’ is being strategised. Our three year electoral cycle does not help to focus the politicians on anything other than finding short term solutions. But somehow we need to cut through this Gordian Knot we are tangled up with, as trouble is looming beyond the horizon.

On that note, I wish  you and yours a Merry Christmas and a Happy New Year  – which hopefully includes a reflective period of sorts.